As we flew over the stark, rocky mountains of East Greenland, I couldn’t help but marvel at the audacity of Eric the Red in naming this arid land “Greenland”. The views below were like nothing we had seen before, Aqua blue water in stark contrast with thousands of icebergs, and imposing mountains of granite rising straight out of the ocean. Massive glaciers could be seen on the horizon, depositing thousands of ice into the ocean every day. The only green I could see, I thought to Eric the Red, was the subtle aqua in the color of the water. 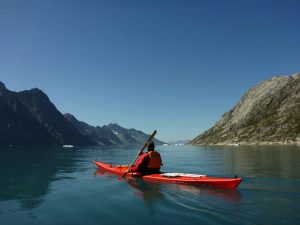 Our goal was to circumnavigate Ammassalik Island and we had 12 days to do it.  This is an attainable goal in terms of distance, but the weather and ice are the unknown elements. This circumnavigation would have once been an impossible task, but is now made possible as climate change is allowing passage through fjords that were historically blocked solid with ice. This bode well for our trip, as too much ice in the fjords would cause forward progress to cease. We were told story after story of how trips were cancelled, cut short, or even unable to begin because of the ice. Everyone we talked to also had at least a handful of polar bear stories, which all contradicted each other. Some examples;

The messages were mixed, and we were left to devise our own plan for our defense against polar bears.

When travelling to Greenland, you need to be prepared for plans to change many times over. We experienced a broken down shuttle boat-causing a wait time of 6 hours after our flight. There was confusion with our booked accommodation. We had to barter to be able to get access to our kayaks the day before we left. But in true adventure style, we laughed it all off and soon enough we were packing our expedition kayaks with all the gear we would need for 12 days. A few items unique and essential to this adventure were;

There was only one problem with our intended route plan-our first day’s paddle was the most exposed coastline of the whole trip. If the winds and seas didn’t cooperate, we would have to wait or somehow get a water taxi to shuttle us past the first day (unfortunately, one of the three water taxis that existed in Tasiilaq was down for the count!) The mouth of Tasiilaq Fjord is a relatively small entrance, allowing no swell, wind or weather to enter the community of Tasiilaq. So we had very little idea of what was lay just outside the harbour. We exited the mouth of Tasiilaq Fjord with some trepidation, wondering if our trip would be kyboshed before it had begun. We paddled past the entrance, past icebergs taller than 10 story buildings, and encountered 2-meter swell, but calm winds and incredible views. We were ecstatic! 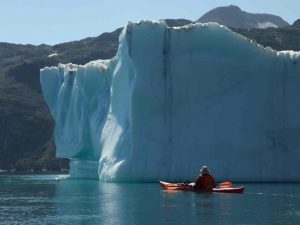 If I were to sum up the first days paddle in two words, it would be sensory overload. We experienced unimpeded swell rolling in from the south, creating huge explosions of white water on shallow rocks. All day we paddle past inhospitable cliff faces. Incoming swell against the rebounding waves from the cliffs is called Calapotis and creates very chaotic seas. All day we paddle in seas that had no rhyme, rhythm or reason to where the waves were coming from or how big they would be. This took a lot of bracing, balancing and nerves to keep upright. We paddled past huge icebergs the size of two football fields, adrift in the current. After 10 kilometers of exposed coastline, one of our members became sea sick, bravely putting in paddle strokes between boughts of vomiting.   We were able to find shelter behind an island with a rocky beach. The term “beach” is used loosely. We got out on huge uneven boulders that offered a slightly easier landing than anything for miles around.

After a long lunch and some seasickness meds, we decided to get back on the water and finish the crux while our weather held. Eventually we paddled into calm waters and made our way to the abandoned village of Ikatec.   We eagerly explored the abandoned village. From all appearances, it seemed the occupants had been living normal lives one minute, and then were gone the next. Dishes and pots looked like supper was almost ready, candles were set on the tables, the organ was still semi operational in the church.   We set up camp not far away from the abandoned village and debated the reasons for their mass departure.

Our first night camping out with the midnight sun was one of adjustment for us all. The Island we were on was in the middle of Sermilik Fjord. Calm seas surrounded us and hundreds of thousands of Icebergs, which extended as far as the eye could see. We reveled in the midnight light, watching the low hanging sun bring out brilliant hues of green, blue, and grey from the moss, the grass, the rocky shoreline. We watched as the sun slowly moved along the horizon, creating an incredible play of shadows and brilliance on each iceberg, which were glowing pink with the almost setting sun. 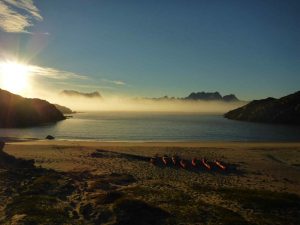 As the trip progressed, each day presented something totally different from the next. Sermilik Fjord was chocker block full of icebergs. The water was like murky glass, the icebergs perfectly reflected in the mirror below. We formed a chain of kayakers and slowly made our way through the maze of icebergs. We were incessantly on watch for the tell-tale black nose of a polar bear. Navigation was difficult as icebergs blocked our views of islands, the coastline, and made progress very slow.   We were constantly assessing each iceberg’s potential for rolling or cracking as we slowly paddled by these monoliths.

This day was like being in a dream. Sounds were muted by the icebergs, huge cracks and explosions could be heard all day as icebergs shifted and rolled. Everyone was silent, in awe of our surroundings, and tense from scanning the water and ice for polar bears. We closely checked our GPS to make sure we wouldn’t miss our exit point from the Fjord. At one point we were forced to paddle far out into the Fjord to navigate around ice too densely packed to paddle through. We made our exit point as the ice thinned, and we left the dream like state we had all been in. We were able to let our defenses down, with less chance of polar bears with less ice, and no chance of being hit by ice or the wave created by a breaking iceberg.

Along the journey we visited three East Greenlandic Villages. These small villages are placed in some of the most inhospitable places on the planet. Each building is painted a different color, making these villages look like Lego blocks placed at the foot of tall mountains. The adults were friendly, but we really connected with the children. They were curious and full of energy during the long hours of daylight. We played with many Inuit children, sometimes trading local herbs for slices of cake or a taste of a curry meal. They romped around, unsupervised by adults, enjoying the freedom that the sun provided during their short summer in the North. 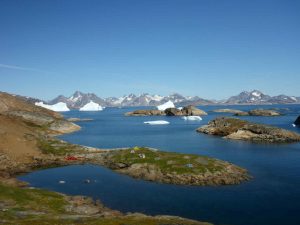 Each campsite offered us a different perspective on Greenland. At one particular rocky Island camp, we discovered multiple large, Cairns. Upon further investigation, we observed ancient human remains inside. As we sat amongst the Cairns, we contemplated how the Inuit were able to survive in such a harsh landscape. Upon death, the Inuit would wrap the deceased in an animal fur, lay the body face up on the tundra, and build a rock cairn around the body to prevent scavengers from disturbing the site. We had stumbled upon this site accidentally, and respectfully left the Cairns and remains alone. We were deeply moved by this glimpse into the culture and life of the Inuit.

On numerous days we battled against strong head winds that are notorious in the glaciated Fjords of Greenland. We were warned about the notorious “Male” wind, call Piteraq winds. In winter months, these winds can reach 320 Kilometers an hour and destroy many buildings and structures in its path. On one afternoon, we clocked the winds at 46 kilometers an hour as we were paddling. We were paddling through an area where numerous Fjords met and the seas were incredibly confused, with waves coming from all directions, and no sense to the timing of the waves. I had never paddled in seas so confused before. We had waves breaking over our boats and the wind threatened to rip the paddles from our hands. These winds felt like fingers of ice and the temperature plunged quickly. We quickly paddled through a small break in the shoreline and waited for a few hours as the winds continued to howl past. At times like these, our group shelter was invaluable as it kept us warm and out of the wind. Patience is a virtue when paddling on the ocean. 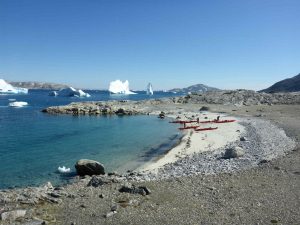 As if the winds and confused seas weren’t enough for our adventures spirits, dense fog threatened our last few days. As we approached Ammasalip Fjord, Advection Fog filled all the Fjords and passages like fingers of death approaching. Advection fog forms as a warm air mass passes over cold water. It doesn’t burn off with sun or wind, and can pose a real threat to kayakers. We found a campsite just as the fog increased in density and the winds started howling. The fog was rushing by like a freight train, obscuring everything in its path. We took a compass bearing, and could only hope that in the morning, it would disperse for our last crossing-Ammasalip Fjord. We awoke bright and early, 0400 hrs, to do the crossing with little wind. As we began breaking down camp, the fog cleared and we had a calm, uneventful final crossing-the kind of crossing we all hoped for but didn’t think we would get.

Paddling in Greenland offered something different everyday. From iceberg-choked fjords, to glaciated mountain views, from calm protected waters to open coast paddling we experienced it all in Greenland. As we finished the loop that we had begun two weeks earlier, we paddled in silence, each reminiscing over our experiences from the trip. We each took away something different from this land and its people, and we all hope to return one day to explore the endless fjords and coastline of East Greenland.