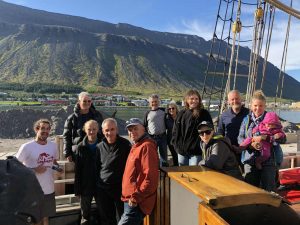 Our team of 8 friends from Australia sailed into Hornstradir Nature Reserve under clear skies and light winds. It was the perfect start to the Arctic adventure.

We pushed on into the evening and as the sun finally set we anchored in Hornik bay in the far northern reaches of the Reserve.

The following morning we were up bright and early and oh what a morning it was, perfectly still and not a cloud in sight.
Wanting to take full advantage of the amazing conditions we launched the kayaks and set off to explore this amazing place.

Hornstrandir is arguably the wildest part of Iceland. With no roads and apart from a few intrepid hikers, there are no people; it feels very wild. Under towering sea cliffs that are absolutely packed with nesting sea birds we were immediately engulfed in a spectacular avian scene. Thousands of Fulmars, Black Guillemots and Puffins flew overhead as we slowly made our way along the shore.  As we returned to the yacht for lunch we spotted a family of Arctic foxes playing close to shore. 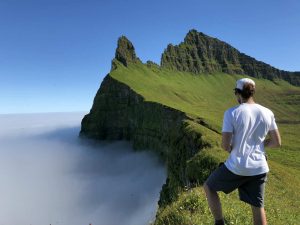 The amazing conditions persisted into the afternoon and we set off for a hike into the hills. The landscape in this northwestern corner of Iceland is absolutely stunning. Our hike took us along the top of sheer walls that plunged straight into the ocean, a layer of fog had gathered near the ocean creating a mystical scene. Birds dove in and out of this cloud layer sometimes coming within meters of the group.As we descended back down into a valley on the way back to the boat we commented on how lucky we were to be in such an incredible place 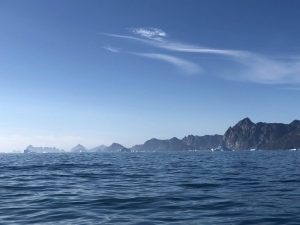 The next day we set sail for Greenland, the calm conditions persisted with just enough wind to raise the sails and get a helping hand across the Denmark Strait. Crossing an ocean is a truly amazing experience, the land behind you slowly drifts away and all that is left is an empty ocean and the steady rise and fall of the waves under the boat. A compliment of Fulmars kept us company for most of the crossing and a family of Fin Whales greeted us about half way across to Greenland. The crossing itself takes 2 days and by the middle of the second day, the mountains of Greenland were visible in the distance.This was a different world to the one we left in Iceland. Our latitude hadn’t changed much. However the green hills of Iceland had been replaced by dramatic mountain scenery filled with massive glaciers and shear granite walls.

The weather in East Greenland during the summer is dominated by a constant high pressure, which means calms winds and constant sunshine. We entered Gustav Holm fiord in these perfect conditions and made our way under towering peaks to our anchorage. 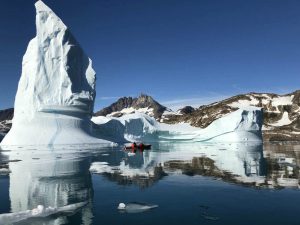 With 4 major glacier fronts to explore in this Fiord we wasted no time heading out for a paddle.  Kayaking amongst massive icebergs is truly special, each iceberg has it’s own shape and character, carved out by the elements and the ocean there are no two icebergs that look alike. It was the first time everyone on this trip had paddled with icebergs and they instantly became a focal point.  After much coaxing away from the hypnotizing icebergs we made our way over to the glaciers and found a new focal point.

Glacier fronts are incredible, millions of tons of ice pulled by gravity down the mountains, slowly moving towards the ocean. If you’re lucky, you’ll witness large pieces break off (sometimes violently) into the ocean. It’s a spectacle we all wanted to see and thankfully during our 9 days in Greenland we witnessed several large glacial carvings.  After a long day of kayaking and hiking in Gustav Holm fiord we made our way back to the yacht where we celebrated with a hearty meal and a few tasty beverages. 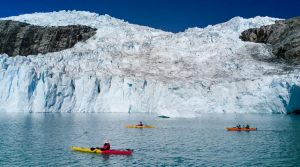 The next day we slowly made our way out of Gustav Holm fiord and down the coast, our next stop was Nigertussoq fiord. Along the way we were dropped off in a little bay filled with Icebergs. Our plan was to hike over a low pass and meet the yacht on the other side in Nigertussoq Fiord. Getting to the shore proved difficult with so many icebergs. Slowly but surely we found a way. 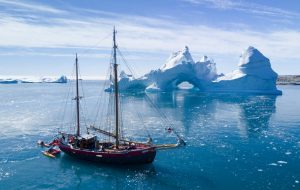 Hiking in Greenland is incredible, with no trees to obstruct the way and glacier calved valleys to hike,  it’s a great way to see Greenland in a different way.  We completed numerous hikes in Greenland, each one a little different. Many times we would take a break from paddling, stop at a nice beach and go for a short stroll to a waterfall or up onto a glacier.  During the brief summer there is an explosion of growth. Flowers and low lying plants fill the normally barren and bleak landscape with stunning colours. One particular hike took us past a turquoise blue alpine lake, over several small creeks and into a stunning valley filled with Arctic vegetation. As we reached the far side of the pass, we could see the fiord on the other side begin to emerge along with our yacht which was slowly making it’s way into the fiord.  Without another human for hundreds of miles to witness it except us, it was a picture perfect moment.

Our journey south continued, each day bringing something new and incredible. We finally entered the Ammassalik region, the cultural focal point of Greenland’s east coast. With 6 villages dispersed throughout Ammassalik , this part of the journey provided a 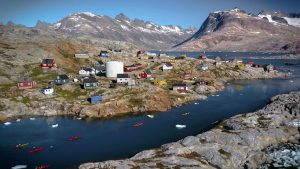 incredible opportunity to learn about the people and their unique history. We stopped at 3 villages during the last few days. It was amazing to see how these hardy people survive and how they lived in total isolation until about 100 years ago when the first Westerns arrived.

With the final day upon us we took the opportunity for one last paddle, a spectacular glacier front was the venue.  We sat in complete silence, hypnotized by this final spectacle and recounted all the amazing experiences we had during the last 12 days. It seemed a lifetime ago that we were in Iceland and yet it also seemed like almost yesterday.

Twelve days of exploration in the most remote regions of Iceland and Greenland. 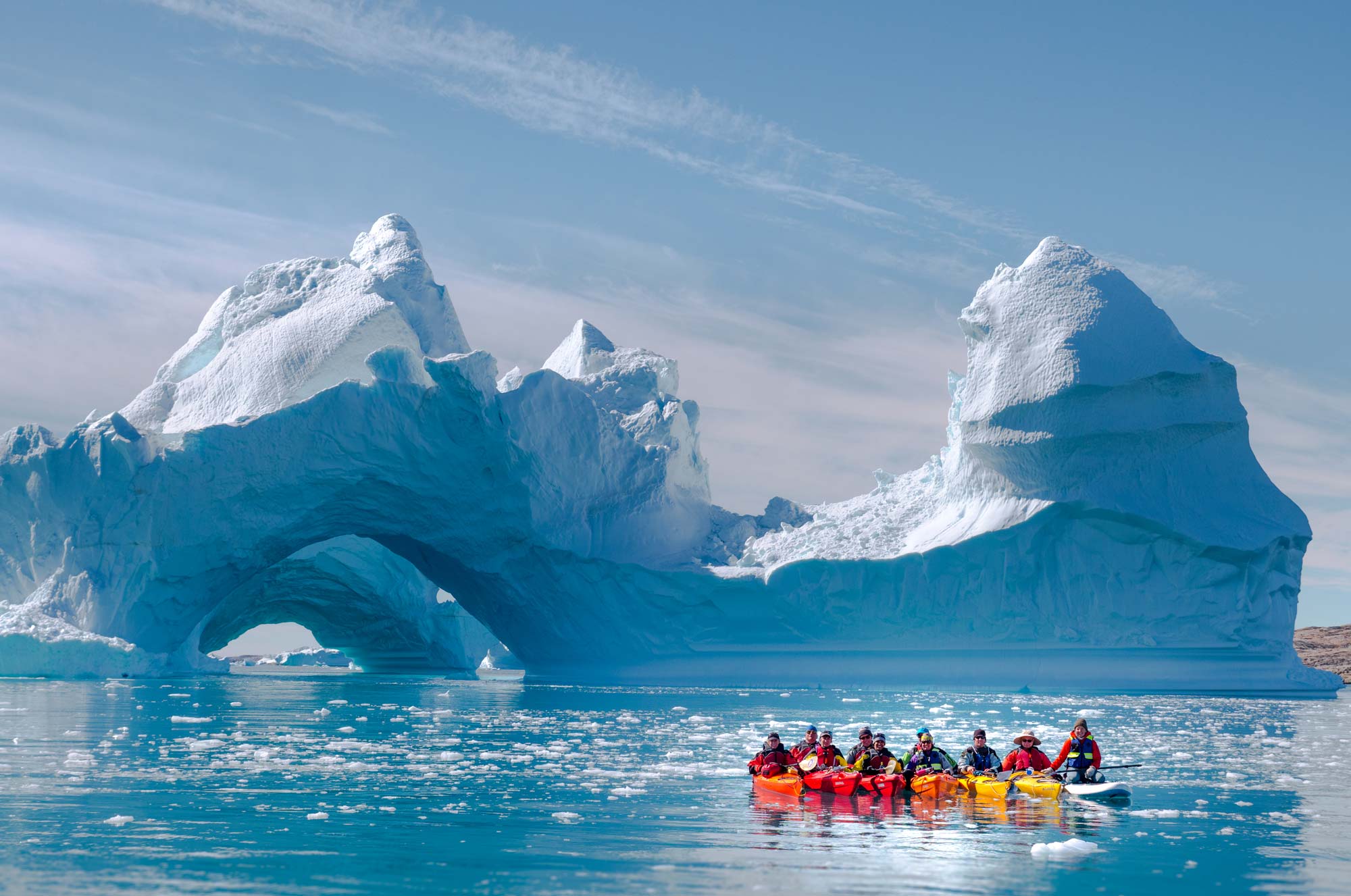