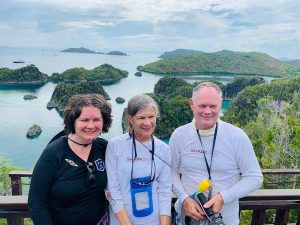 In September 2016 our daughter Emma aged 33 had a stroke. She was left with right sided paralysis and aphasia, a language disability that affects her ability to read, write and speak. With amazing help from speech therapists and physiotherapists and a lot of determination and hard work, she has regained her ability to walk and communicate however neither to her pre-stroke levels.

Emma’s Dad John, and I have done several trips with Expedition Engineering guides Matt and Angela. While on a Myanmar exploratory trip in 2018 they suggested it would be great for us to include Emma, as she had enjoyed kayaking prior to her stroke, having joined us on a trip in Croatia in 2015. It was decided to include her in our next planned trip to Raja Ampat in December 2019.  Matt and Ange were keen to use the Jakaré and very kindly waived any charges for Emma. 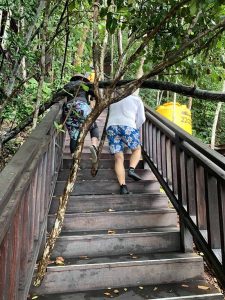 With a lot of trepidation but plenty of courage Emma worked hard with her physiotherapist in the last few weeks before departing to ensure she had some good strength in her legs. We all decided that using a half paddle and going in a double kayak would be the best option for her. Emma uses a glove on her right hand called Active Hands (www.activehands.com). This gently but firmly holds her right hand onto objects, in this case a kayak paddle.

Arriving on board the Jakaré, the crew and in particular Nico ( cruise director) along with Angela,  did everything possible to help Emma manoeuvre the stairs, bathroom, bedroom and accessing the kayak. If there was a problem, a solution was found! Fortunately we had the rear cabin which had direct access to a back transom where an inflatable boat was positioned. From there Emma was assisted by 2 crew to position herself in the kayak, with her rear paddler helping too.  The procedure worked easily for a fairly seamless entry and exit for every paddle she undertook. Halfway during the trip she wanted to try a full paddle, which she found easier to assist her companion. Of course, she didn’t have the strength to paddle all the distances, but with either Dad John or guide Angela at the rear she was still a valuable contributor to the outings.

There were of course some outings that were not possible for Emma to be included in, particularly those involving climbing up rough limestone paths. But if there was an outing that Nico and Angela felt she could manage, we were all given the advice and support needed to do it! Mansaur in particular was a brilliant help in returning down the 300 steps from the lookout at Paiynemo.  Definitely a sight worth seeing. A highlight was the swim in the large cave at Goa Keramat that was reached by a long trip in the inflatable. If Emma did not go on a kayak with us, very often she was included in the crew’s expedition by inflatable to assess the best snorkeling spots. 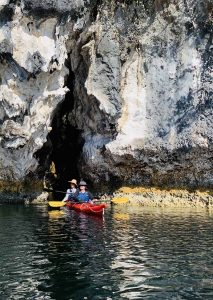 The whole experience was wonderful. By the end of the trip Emma was managing stairs  without railings by herself and coping brilliantly with life on the boat. The look of pleasure and wonder on  her face when she was in the kayak, looking a amazing water, coral and fish life, made us all cheer ( and shed a little tear too) at her achievements. Emma believed she had lost the ability to participate in an activity she had previously enjoyed.

With the wonderful encouragement from Angela, Matt, Nico and the crew of Jakaré, particularly Mansaur, Emma’s holiday was amazing and personally fulfilling. We all cannot thank everyone enough for this opportunity.