A memorable trip in the great bear, 2016 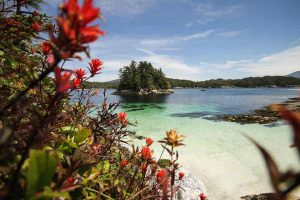 I have spent very little time on a sailboat, almost none in fact. I have spent some time on small cruise boats in the open ocean, and for most of that time I was, unfortunately, seasick. So when the opportunity came to run a sea kayak trip off of a sailboat, I was both hesitant and excited to say the least.

My excitement came from the fact that we would be exploring the Great Bear Rainforest (GBR). This tract of land in B.C. Canada, represents the worlds largest intact temperate rainforest. In early 2016 an agreement was finally established to protect 85% of the area from logging. The GBR encompasses 6.4 million hectares and is home to black bear, grizzly bear, cougars, wolves, and the elusive spirit bear. The forest is home to 1000 year-old giant cedars and 90 metre tall Sitka spruce. This area represents everything that is wild and free and unspoilt about the Canadian Wilderness.

Our journey began in the last small stamp of civilization on Vancouver Island, B.C.  We boarded our sailboat, with sea kayaks strapped on the deck, food for 10 days stowed in every nook and cranny of the boat, and spirits high for the adventure ahead! 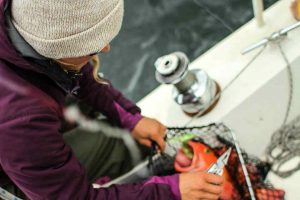 The skies were dark with threatening rain clouds, the wind was brisk as we raised the jibe and began to cross the northern tip of Johnstone straight. We didn’t get very far. We were soon adrift in the channel, silently watching two humpback whales feeding in the strong currents near the Gordon Island Archipelago. Johnstone straight is known for its high concentration of marine life, as the strong currents bring lots of nutrients through the area. Perfect for whales, orcas, fish and intertidal life.

Soon enough we gave the humpacks back their solitude and continued along for the second half of our crossing. But again, we were soon adrift in the currents. This time, a hundred whiskery faces turned our way-grabbing our attention. The faces of sea otters, adrift on the ocean, feeding on sea urchin, was an amazing sight to behold. They were once extinct from the B.C. coast, but reintroduced in the 1970’s and they have been slowly repopulated the coast. We would see many, many more sea otter in the days to come.

I soon grew to love life on a sailboat. We would awake to beautiful morning light each day. Enjoy coffee and breakfast on the deck of the boat as we took in the temperate rainforest, the rock formations and the still dark green waters around us. Each day we would paddle for 5-6 hours. Sometimes exploring an area around the anchorage, sometimes paddling from point A to B where the sailboat would meet us for lunch at another spot. We would have supper on the sailboat, and end the day watching the red and orange hues of the setting sun reflecting off the calm waters of our anchorage. 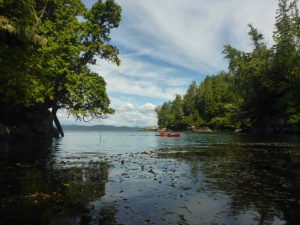 We paddled to Nakwakto rapids which is an area that has some of the strongest tidal currents in B.C., reaching up to 32 km/hr. We paddled up to Tremble Rock, a tiny island in the middle of the tidal rapid. Legend has it you can sit on the island and feel the rock tremble when the water is racing by. We explored the area at slack tide, and then watched from the shoreline as the mill pond soon became a roaring river, with whirlpools, white water, and sea otter playing amidst the torrent!

Our greatest chance to see Grizzly bears was at Koeye River. This is an incredibly beautiful spot, which is now home to a resort owned by the First Nations. The resort holds first Nations Events, is home to a discovery Camp for First Nations youth as well as is open to the public as a resort in the middle of a wilderness setting. 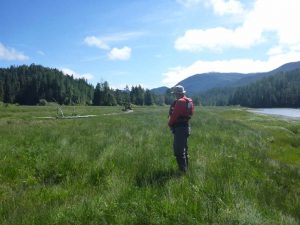 We motored around a point of land and cruised into the small bay that is the terminus for the koeye River. Kilometers of beautiful white sand beaches greeted our eyes as we set the anchor. We were all very excited to get into our sea kayaks and start paddling up the meandering river. We enjoyed a short surf through the river mouth, and began our explorations upriver. We surprised a river otter as he was feeding. The peace and tranquility of the Koeye river soaked into our souls, and soon we were all silent, letting the beauty of the cedars, the sitka spruce and Douglas Fir soothe us. We soon came to an open grasslands area. We got out and sat on a high point, overlooking the lush grasses, watching for grizzlies. After a time we decided they must be eating berries in the forest, and went for a paddle up a small creek that wound its way on the outer perimeter of this beautiful grassland.

The furthest reaches of our journey brought us to Calvert Island. This is by far the most beautiful place in the Great Bear Rainforest. Calvert Island is geologically made of up granite rock and lies on the outer coast of the GBR. This is a place where unimpeded ocean swell first hits land. It is a place where storms, wind and wave action have eroded the landscape for thousands of years, creating a wild and beautiful stretch of coastline. We paddled under 100 foot high white granite cliffs, past white granite islands, and alongside pristine white sand beaches giving way to aqua blue waters. We walked along these beautiful white sand beaches, hiked through a forest trail alongside a still pond with yellow water lillies by the hundred. We went for a refreshingly cold swim in the outter coast waters. 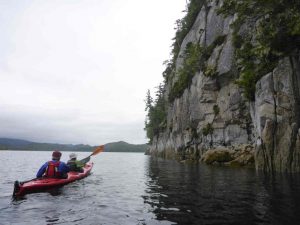 Calvert Island is home to the Hakai Research Institute where many scientists and marine biologists converge each summer. One site discovered in 2015 may represent the oldest evidence of human existence in this area. The footprints and fire ring of two adults and a small child were discovered, carbon dating suggests these prints are 13,100 years old.

Our last paddle of the journey took place in God’s Pocket Marine Park. This is a small archipelago located just outside of Port Hardy, the start and finish to our trip. Because of the strong currents that flow past these islands, the intertidal life is like no other. The California Mussels are unbelievably large. We saw bat stars, ochre sea stars, sunflower stars and many more species of sea star. Schools of small fish swam under our boats, gumboot chitons were plentiful, leafy hornedmouth snails graced the cliff walls. Not wanting the trip to finish and being enthralled by the intertidal life, we drifted; lily dipped, and immersed ourselves in the rich marine life around us. 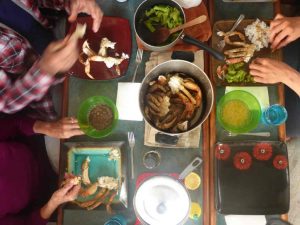 We eventually returned to our sailboat and loaded the sea kayaks onto the deck for the last time. We turned off the sailboats engine, set up the jibe and main sails, and in silence we sliced through the water towards the harbour.