Greenland may be the ultimate heli skiing adventure–its treeless landscapes, rugged raw beauty and ends-of-the-earth feel are unlike anywhere else. Vast glaciated peaks and unnamed runs descend into iceberg-filled fjords. Flying out over ice floes, you’ll often spot native Greenlandic people out hunting with their dog sleds or polar bears prowling for seals. That combination of stunning scenery, Greenlandic culture and world-class wilderness skiing has made heli skiing in Greenland a true bucket list experience. 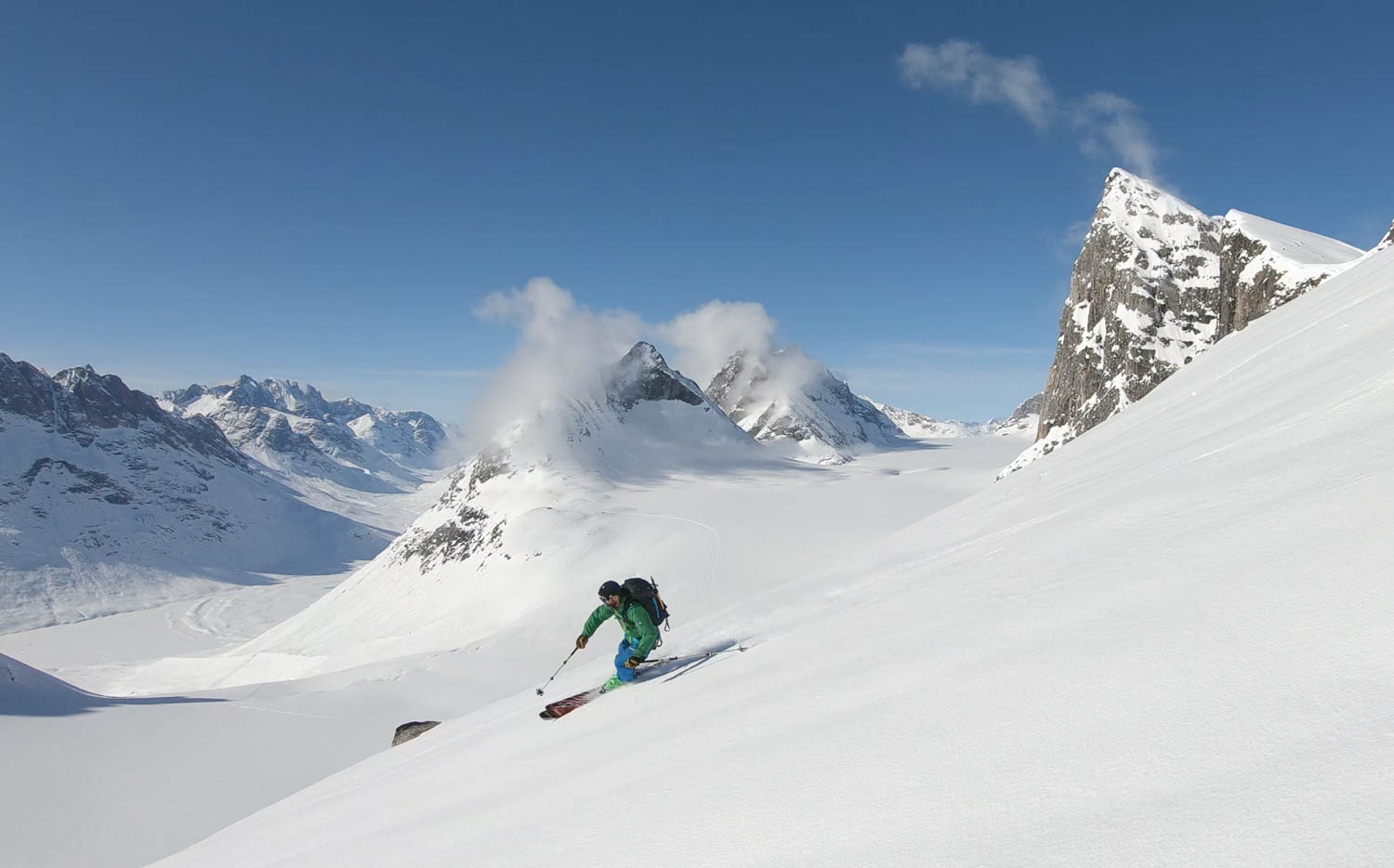 Why Go Heli Skiing in Greenland

At 2.11 million sq kms in size, Greenland is about a third the size of the continental US (it looks way larger on maps due to distortion on flat projections) and has only 150kms of roads, 60 kms of which are paved. With a population of only 56,000, it is the least densely populated place on the planet. The Greenland ice sheet covers more than 80% of the island’s surface and it’s estimated that the world’s seas would rise by more than seven meters if it melted.

Compared to heli skiing in more popular places like BC or Alaska, Greenland is a much wilder experience. Alaska is known for its steep terrain and big lines, BC for its deep powder and tree skiing, but most runs here have been skied hundreds or even thousands of times. In Greenland it seems as though you are the only skier on earth. It’s way more of an adventure than BC or Alaska.

There are no flags for helicopter pickups and dropoffs, and no trees. Exploration and first descents are part of every heli ski trip. Heli skiing in Greenland is also unique due to its proximity to the ocean, and the amount of time you spend flying over the ocean, something you seldom do in BC or Alaska. In fact, regulations require helicopters to be kitted out with flotation in case of an emergency water landing and life preservers are carried in the cockpit. You are literally flying over gleaming icebergs on your way out to ski. 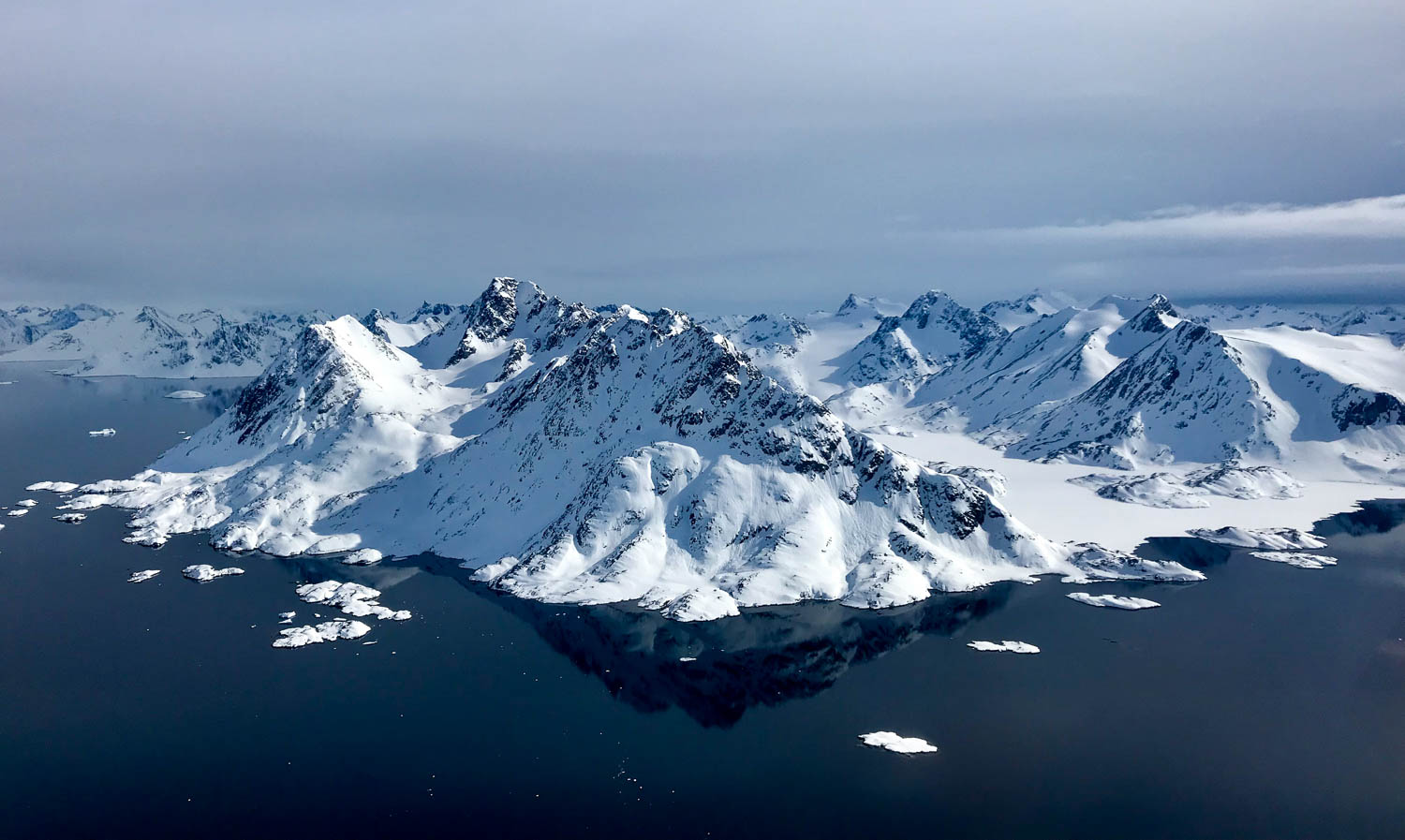 In a place that’s literally made of snow and ice, you can go helicopter skiing almost anywhere, but some places are better than others. The mountains of East Greenland are higher, steeper, more dramatic, and provide longer vertical descents than the west coast. Storms track east across the ice cap, and as they go they get colder so the snow on the east coast is generally drier and provides better quality riding. The terrain features here offer excellent skiing: open bowls, steep chutes and long glacier runs, but are most suitable for advanced-expert skiers. For all these reasons, we recommend heli skiing in the Angmagssalik region of East Greenland.

There are other reasons to plan a ski trip to the east coast. The vast majority of Greenland’s population resides on its west coast, and its capital Nuuk. There are a large number of Danish residents here and the west has a much more European feel. It also sees the majority of the island’s tourism.

East Greenland has a population of only a few thousand people. It’s much more remote with only a handful of towns, and the people who live here are almost entirely Greenlandic. Modern amenities are fewer, and the locals rely heavily on traditional hunting and fishing methods to survive. 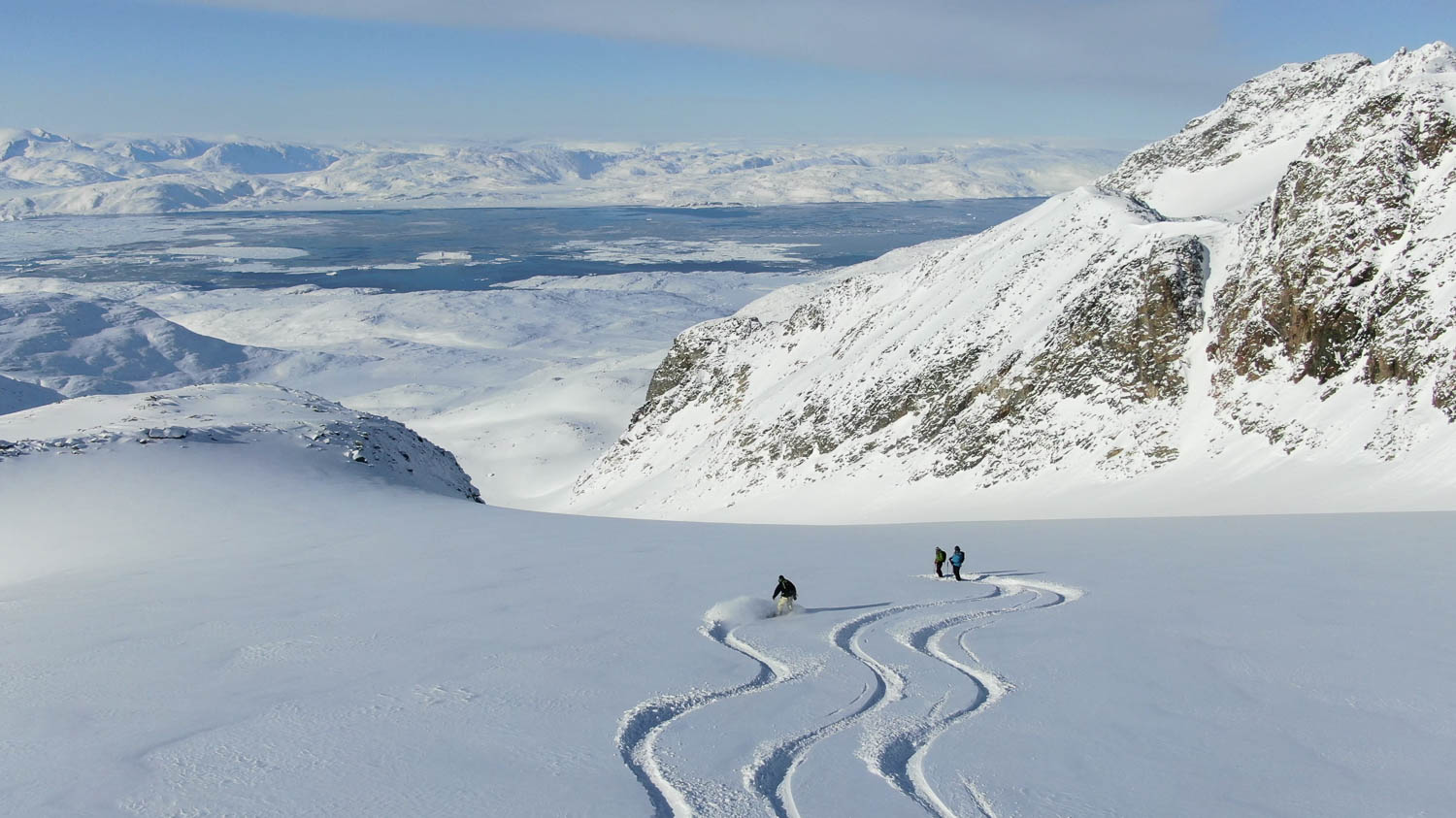 Getting There and Around

Greenland is currently open for travel for fully-vaccinated international visitors (a negative COVID-19 PCR test is required within 72 hours of departure to Greenland).

There are only two airports on the whole east coast, both of which are small gravel airstrips. Air Greenland offers flights from Reykjavik, Iceland, to Kulusuk, the main transport hub of East Greenland. From there, take a helicopter flight to the town of Tasiilaq (included in Expedition Engineering’s trip cost), a town of 2000 people which has the largest population on the East Coast.

In a country with almost no roads, and heavy sea ice for much of the year, helicopter, snowmobile and dog sled are the main modes of getting around.

Where to Stay on Your Greenland Heli Ski Trip

The towns of Kulusuk or Tasiilaq, on the East Coast, both work well but Tasiilaq is more interesting and being the main population centre, provides a better cultural experience. While there are a few accommodation options, one of the best is the museum-like Angmagssalik Hotel with its stunning views over King Oscar Fjord. The hotel amenities are somewhat basic, but they are the best available in Tasiilaq and are more than made up for by its location, which offers easy access to village visits and traditional Greenlandic culture.

Local crafts, such as carvings made out of whale and or polar bear bone and traditional clothing can be purchased in Tasiilaq. There are five small settlements close by, and it’s possible to ski down into some of them while out heli skiing. There you may see people harvesting and skinning seals, and hanging the meat out to dry. Sometimes you see them bringing in a whale or polar bear and dividing the meat up amongst the town residents. East Greenlandic language is the common tongue here so having a local guide is essential.

Food served in Tasiilaq is literally whatever the local hunters bring in and are willing to sell. It may include whale meat, seal, polar bear and muskox, all of which is harvested sustainably. Dining here is part of the adventure! It’s important to remember how hard it is to get food in East Greenland; most food comes on a barge that can only arrive in the summer months. There are two Greenlandic beers available, and both are on tap in the Angmagssalik Hotel – Qajaq Beer and Godthaab Beer.

With its location just straddling the arctic circle, Tasiilaq’s days are too short for skiing until about early March. Powder skiing is possible until the end of March and often beyond. Spring weather in East Greenland is generally dominated by high pressure systems with blue skies, light wind and temperatures ranging from -10C to -3C, but colder temps and big snow storms are still common. By April, skiing tends to be on corn snow but stashes of powder may be found higher up on north-facing slopes.

With longer daylight by mid-March, you can be skiing well into the evening. A typical day in good conditions could allow 12,000m of vertical and 10-15 heli ski runs and may last till 7:30pm (but most people are tired well before then). If venturing further afield to rarely visited places like the Karale Glacier there are numerous unnamed peaks that have never been skied. This is true exploration.

While there are no avalanche forecasts in Greenland, the coastal snowpack here is deep and typically well-settled with good stability. Guides will dig pits and make field evaluations as they go. Air bags, probes, shovels, and beacons are provided to guests but they need to bring their own skis or snowboard, as no rentals are available here. A key to heli skiing safely in Greenland is the helicopter pilot. At Expedition Engineering, we work with one of the most skilled and experienced pilots in the country and use B3 A-stars, which are ideal for the mountains here.

Greenland is also the only heli skiing location where guides ski with guns. Polar bears are common here so guides ski with Remington .30-06 rifles. We’ve never had to use one.

On down days when the helicopter can’t fly, which average about one day per week, there are still lots of things to do.

Local dogsled operators from the nearby village can be hired to take the guests out, across the fjord and through some mountain passes. Guests don’t drive the sleds themselves, but have a Greenlandic musher who stands on the back while the guests sit on the sled. It is a totally chaotic and adventurous experience, as the dogs are quite wild and often fight with other dog teams.

If guests bring ski touring equipment there is some good touring close to Tasiilaq on days the machine can’t fly. And depending on the amount of ice in the harbour, a day out fishing with a local guide may be possible too. You may even see whales such as belugas or narwhals.

Iceberg visits are another great activity on down days. The intense white and sky-blue ice is something that has to be seen to be believed.

In Tasiilaq there’s also a small rope-tow ski hill that visitors may share with the local kids.

Due to its far north latitude, on clear nights it’s worth putting on a puffy and venturing outside to witness the northern lights. The dazzling display can be seen on most trips and is unforgettable.

Expedition Engineering has been pioneering heli ski trips to East Greenland since 2015. An 8-day trip, including helicopter flight from Kulusuk to Tasiilaq, accommodation, meals, ACMG guides and avalanche safety equipment costs € 8500. Our next trip date is March 11-18, 2022.

Curious about what skiing in Greenland is all abou

Borders are opening up, things are shaping up nice

Sending it to the sea

Dogsledding is an integral part of Greenlandic cul

One of the most common questions we get is “what

One of the most common questions we get is “what