After a week of sea kayaking in the Lofoten Islands, Norway, I began to wonder why I felt so at home, so free, and alive, why this felt like home. My memory was jogged by hazy stories when I was young of Viking ancestry in my family lineage. I am not sure if this Viking ancestry is myth or reality, but the wind, the storms, the light of Norway stirred my soul in ways unknown before. It may just be possible, that this land of the midnight sun enchants every traveller the way it enchanted me. 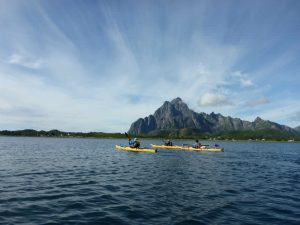 Viewing the Lofoten Islands from a sea kayak is the most incredible way to experience these Islands. Every day was like watching a time lapse from National Geographic. This time lapse highlighted the golden morning light, moving to brilliant daytime light and ending in the pink and purple hues of the midnight sun. Sea kayaking below 800-meter cliff faces of granite made us feel tiny and insignificant. Paddling along the base of these cliffs gave us a unique perspective that few visitors experience. We marvelled at the height of these mountains, at the rawness of the landscape as unimpeded ocean gave way to solid, granite cliffs.

I had to keep reminding myself that we were actually in the Arctic Circle. Yet because of the warm ocean currents that come from the south, it feels very temperate.

Numerous historical fishing villages exist along this rugged coastline. Each day, we went from remote, wilderness paddling, to complete immersion into civilization. There is not much flat ground in the Lofoten’s, so the Norwegians built their villages on islands that were fairly flat. Historically, everyone got around by boat. So there was no problem with towns built on islands. But in modern day, as vehicles have take over transportation, beautiful, arching, bridges were built to connect the main island to the smaller island villages. These towns are so unique in that all the harbours are on Brygge’s, or stilts. All the docks and the first row of buildings are built on stilts. As a kayaker, this can prove a little difficult when trying to find a place to land. But find a low dock, and voila! 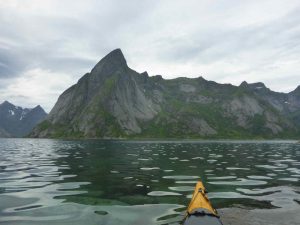 Most of these fishing villages have been transformed into quaint, touristy villages. Coffee shops, museums and art galleries abound. Yet the traditional way of life is still fully operational when the Cod season is on. There are hundreds of massive fish drying racks in every town, hundreds of fishing vessels tethered to the docks, waiting February when it all begins.

During our first week, we paddled the south side of the Lofotens. The south coast is protected from the cold, strong North winds. As we paddled along the rocky, granite cliff shoreline, we were protected from any North winds. But as soon as we came to one of the many Fjords, this all changed. White caps, strong winds, and often seas churned up by the current against the wind put us all into a different frame of mind. On most occasions the crossings were doable, we batten down the hatches so to speak, put our heads down and as a group crossed these Fjords. On one occasion, we had two large Fjords to cross one afternoon. We came to the first one and there was a hint of a northerly wind so we began the crossing. As we continued, the winds were building and white caps started to form. As soon as we finished the crossing, the winds were howling from the North and the current running to the south. Just the sound of the wind put terror into our hearts! There was no suitable camping site in the vicinity, but we weren’t far from small fishing village. In Stamsund, we found a cabin rental company that allowed us to camp on a flat piece of ground. We enjoyed amazingly tantalizing treats at a local bakery, had our first hot shower in days, and slept fitfully knowing we wouldn’t be stranded in the high winds. 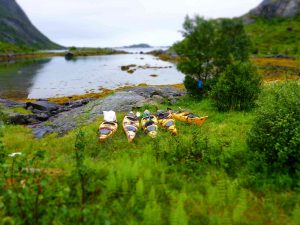 The Lofoten Islands is a rock gardeners dream. With the right swell-every piece of shoreline has dynamic channels to paddle through and ocean swell to surf around and through rocks and reefs. We often felt like little children playing with the ocean swell, gleefully catching the surging waves and catching a free ride! One person would paddle through a particular rocky section, and the rest would follow-hoping their timing and strokes got them through without a wave crashing over them!

At the end of our first week, we paddled into the most incredible Fjord system on the south coast-ReineFjord. As we paddled under a beautifully arching bridge and through a narrow entrance, we were at the meeting point of three Fjords. Each Fjord was a mile wide and a few miles in length, with 600 m granite slabs surrounding every Fjord. The low-slung clouds added a solemn mood to the atmosphere. We paddled the length of Vol-Fjord, looking for a break in the rocks. The chart indicated a possible campsite nestled at the end, which we would need as storm force winds were forecast for that night and the next day. As we got closer and closer, it looked like we would be out of luck, all that greeted us was a rocky shoreline. We persisted, trusting the chart information. Only when we were a foot from the shoreline, did we see a small passage that gave way to a secret bay. Excited with our find, we paddled the length of the protected Bay and came to a beautiful site. Our campsite that night was nestled on a small ridge between two freshwater lakes. We felt as if we were in the centre of an amphitheatre, with sheer granite cliffs all around. We had found a piece of protected paradise where we could wait out the ensuing storm. 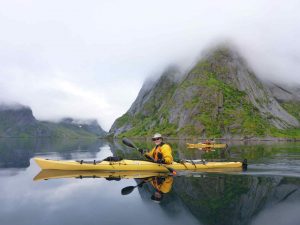 On day 7 our trip changed drastically, as we paddled North through Sund-srtraumen to the North Coast of the Lofotens. The North coast had a very different feel than the south coast. Here, we were exposed to the strong north winds, to the swell from the arctic and to the cold winds that swept down from the North Pole. As soon as we crossed over to the North, we could feel the air temperature plummet and the exposure increase.

For seven days, we paddled along an inhospitable coastline. Thousand metre cliffs rose straight out of the ocean, with no landing sites along the granite walls. Rounding a corner, all of a sudden a perfect crescent shaped white sand beach would present itself. As if a tropical beach had accidently been placed in the artic circle. The feeling of relief and awe at such a perfect beach amidst such an unforgiving landscape increased the stroke rate of our paddling as we straight lined it to the beach. We were lucky enough to have very little swell during our paddle along the North coast as this made beach landings very easy. With any sort of size to the swell, the landings would have been an exercise in surf kayaking every time. The sunsets along the North coast were surreal. As the sun set at 2330 and the sun rose at 0330, we spent hours in the evening watching the never-ending color display of colors as the sun slowly dipped below the horizon for only a few hours. Even at two in the morning, the pink and purple glow above the horizon was astounding. 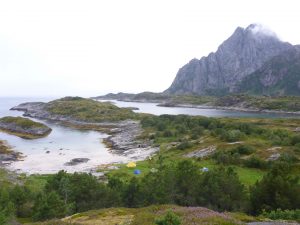 For all Norwegians and travellers, there is an ancient traditional right called “Allemannstretten”. Translated, this means the right to roam. This right has been set out in legislation and ensures that all Norwegians and travellers to Norway are able to access and enjoy the wilderness wherever they want to roam. We were told about the guidelines around this right. If we wanted to camp within 150 meters of a house, we had to ask permission. We stick to this rule religiously, and it served us well. We discovered the Norwegians are some of the most friendly and accommodating people on the planet! At one spot, we found out who owned a particular plot of grass above a beach, and knocked on their door. A middle-aged gentleman answered the door and we explained what we were doing and wondered if we could camp on his flat, grassy patch of grass. With a look of regret in his eyes, he said of course we could camp there, but he apologized profusely that he wasn’t able to cut the grass shorter as his tractor mower was fused at a certain height! Imagine, apologizing for his grass being too high! One of the highlights of the trip was meeting many Norwegians along the way, and hearing about their life and fishing livelihood.

On our second last day, we closed the circumnavigation of Flakstadoya and Vestvagoy Islands. The Norwegian gods seemed to want to bestow on us the memory of every type of weather possible. We started the day with a strong headwind, which then turned into the hardest downpour any of us had paddled in. Rain was not only falling from the sky, but also bouncing off the ocean and into our faces! Every part of us was soaked to the bone. With the downpour, the wind stopped and the seas were the quality of liquid honey. The dark front quickly passed over us and a brilliant sunny sky dominated our paddle. We took off all our soaked clothing, and paddled with as little on as possible. The heat forcing us to de-robe as if entering a sauna! We pulled into a secret passage with a well-hidden beach at its terminus, and set up camp for the last time. We walked to the top of a small hill above our camp and soaked in the heat and the views of unimpeded swell crashing against the rocky coastline and granite peaks in the distance. 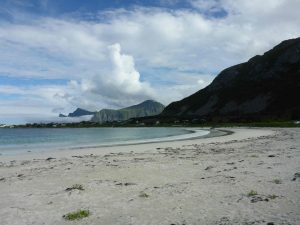