Stepping Forward Into The Past

As soon as I step onto the Pier, I feel like I have been transported decades into the past. The long tail boat we are about to take to cross into Myanmar looks like it belongs in another decade. A solid wooden boat, with a very long bow is propelled by what looks like a basic but large lawn mower motor. This motor is extended 8 feet out the stern on a long pole. The propeller looks like a weapon, and the driver expertly and nimbly manoeuvres this boat through a maze of docks, boats, currents and waves. 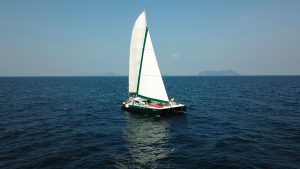 As we travel through the Mergui Archipelago in Myanmar aboard our catamaran, we sail as often as possible. When sailing, the only sound around us is the wind in the sails and the waves being parted against the bow.  How foreign this feels in a day and age where unnatural sounds have taken over our lives. The roar of traffic, the constant sound of music, airplanes overhead, the hum of electricity along power lines to power our lives.  But here, most of the day all we hear are the sounds  of nature. When kayaking its just the dip of our paddles in the water, the waves lapping against the shore, the sound of wind in the trees. 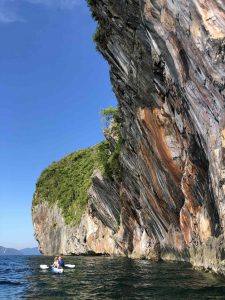 The Moken People we encounter along the way are another powerful symbol that this place exists in a difrerent world than we know.  Grey haired men and women of the Moken tribe can be seen dotted across the landscape in their small, dugout like boats. Built for one person, they paddle these boats standing up, with two long oars secured to the boat on elevated 3 ft poles.  They use a forward rowing technique, involving their whole bodies as they criss cross the paddles in front of them. The balance and grace with which they move these boats is testament to their lives spent on the water. We watch as an elderly woman cruises through 2 ft wind waves, against current and wind, all the while looking more beautifully balanced than the best Stand Up Paddle Boarder in the western world. We are transfixed on her as she ignores our stares, and continues on with her task.

The night sky is another sign that we aren’t in the 21st century. The night sky is devoid of light pollution. There are no city lights to take away the glory of the stars. As the crescent moon comes into view, so does mars and Venus in their full glory. More and more stars appear as the night sky continues to darken, and we can see the furthest stars in the galaxy, beckoning us to remember their beauty and existence. 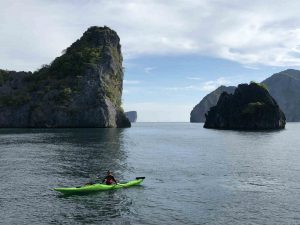 The landscape that we paddle through has very few signs of humans. The beaches we paddle past and swim from have no footprints from prior humans. The jungle canopy behind these beaches look as they did decades.  The dark caves we paddle into feel ancient, the cliff faces we paddle beneath give off an aura of geological time that we cannot comprehend.

There are of course reminders every now and then of the present world. Every so often we need the catamaran engine to propel us to 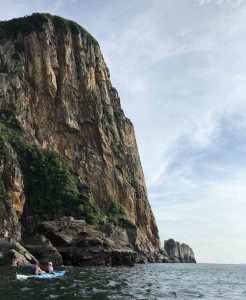 our next destination or to make water from the salty ocean around us. Long tail boats filled with fisherman cruise past in some areas, the sound of diesel engines cutting through the quiet around us. Squid boats on the horizon at night give off an extra terrestrial green hue to the night sky.  The Moken people are facing a time of major change, as the Myanmar government does not recognize their nomadic way of life and they are being forced to adopt a sedimentary life.  The underlying signs of our modern world pop up throughout the trip, with a few small scale resorts in differing stages of being built.

The feeling of being transported back in time resonates with us throughout the entire trip. Every member of our group comments on this feeling. This feeling is hard to put into words, its hard to grasp that a place like this still exists in our modern world.  As I sit in the Bangkok airport with thousands of people jostling in lines, shopping for modern non-necessities, I dream of the sun setting over the jungle canopy, of the sound of hornbill in the air, and the lapping of water against a tropical white sand beach. 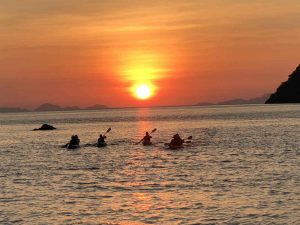