The Heart and Soul of Georgia

The heart and soul of Georgia lies in the centuries long traditions that the people hold dear.  This became vividly apparent to us when we were invited to dinner by our hosts, in a restaurant located in the town square of Mestia.

As we entered the stone building, with wooden posts and beams, the warmth from a fireplace greeted us. The faint smell of wood smoke, incense and baking bread filled the room and created a very intimate atmosphere.  As we sat down with our hosts, the table was filled with lively conversation in a variety of languages – Georgian, Svan, Russian and English. 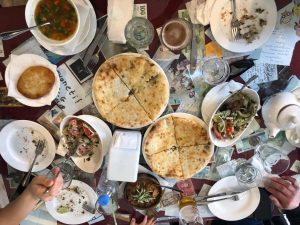 Georgian feasts are called a Supra, and a large variety of dishes are shared with everyone at the
table. There is no “my food”, and “Your food”, but a sharing of everything at the table.  This value underlies all Georgian customs and interactions.  The food began to arrive, dish after dish of traditional Georgian foods. Jonjoli, is a dish made from a flowering bush, called Georgian
Bladdernut, found only in Georgia. Another dish is a walnut paste wrapped in Eggplant called Badrijani Nigvzit.  Khachapuri is a popular dish, which translates to Cheese bread.  The food was delicious, with a range of flavours and spices.  It is shameful at a Supra to have the food run out,  so as soon as a dish was finished, another replaced it.

The most enlightening part of dinner for Matt and I was the toasting traditions made throughout the meal, intended to give thanks, build relationships, and pass on the important values of the Georgian culture to the next generation. 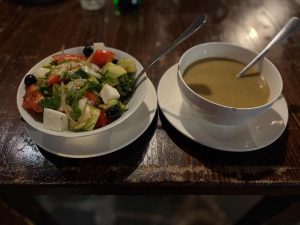 A “Tamada” or toastmaster hosts each Supra.  Our Tamada, was Misha, a Georgian (IFMGA
Certified) Ski guide who was born and raised in Mestia. Throughout the Supra, many toasts were made (I counted 10), interspersed with eating and chatting.  Each toast consisted of a different topic and was filled with emotion, humour, philosophy, gratitude and insights into Georgian life. Misha toasted to family, to children, to the dead, to the Angels, to friends. Cha cha, or Georgian homemade brew, was used for each toast. Cha cha is made from the grape residue left over from wine making, and is a centuries old recipe.

Each toast brought us closer in understanding and friendship with our Georgian hosts and the Georgian people. Their heartfelt focus on friendship, family and mutual understanding is something deeply lacking in many parts of the world today. We were humbled by the sincerity with which they welcome strangers and turn them into family.

As a mountain culture with difficult access to many communities, any visitor to a village was welcomed with open arms, offered food and drink, a bed to sleep on for as many days as was needed. The traveller and hosts became not only friends, but also family in Georgian custom.  We came to Georgia as strangers, and we will leave as family.